The game keeps with the formula that made Book of the Dead such a popular slot game. With a minimum bet value of 0.10 and a maximum bet value of 100, as well as a free play version, Tome of Madness is available to all players no matter how much they want to bet. All of this together means that a player can potentially win a maximum of $200 000 ie a 2000x jackpot.

Tome of Madness, opens with a HP Lovecraft quote from his writings on the ‘The Nameless City’, namely:

“That is not dead which can eternal lie, And with strange aeons even death may die”

The objective of the game is to help our hero, Rich Wilde, investigate the mystery surrounding Cthulhu and find the legendary Tome of Madness. The symbols used in the game are all items related to the world of Cthulhu, from:

There are many special features in the game which seek to help differentiate the game from other slot machines. The game supports a wide variety of languages, bonus rounds, high maximum bets, wild symbols, autoplay, and quick spin features.

In keeping with the theme of the Cthulhu and other eldritch horrors, Tome of Madness features a special Portal that governs many of the special features of the game. Players are able to charge the portal with winning symbols. Depending on the amount of winning symbols in a winning round, the portal will do anything from summoning extra wild symbols to accessing bonus rounds.

Charging Gate to launch Bonus Round

The Bonus round for the Rich Wilde and the Tome of Madness is called the Other World. Players can enter the Other World by charging the gate with winning symbols. In the Other World, players even have the chance of summoning Cthulhu to help them win big.

It takes 42 winning symbols to enter the bonus round, so it is not the easiest bonus round to gain access to. But the potential winnings, once entering the bonus round help to make the difficulty of accessing the Other World, worth it.

The maximum winning amount on Rich Wilde and the Tome of Madness, is $200 000. Players are able to set a maximum bet value of 100. This means of course that the highest possible return available in the game is an excellent 2000:1 return. In order to get this maximum, a player would have to access the Rich Wilde symbol which helps to double the value of any winnings on the board.

Auto Play is available on the Rich Wilde and the Tome of Madness, helping to make the game easier to play. Just click the button at the bottom left to access the Auto play menu where you can set stopping criteria for your Auto Play. 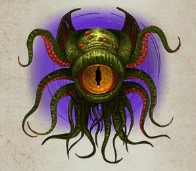 The slot game features a mega wild, which is a symbol that offers wilds on more than one tile. The mega wild is in the shape of an ancient one/monster. This is perhaps the most interesting part of the Rich Wilde and the Tome of Madness scenario – seeing a tentacled god-like figure descending on your slot to help you win your jackpot is certainly one of the more unique experiences from themed slots and is massively fun to watch happen. 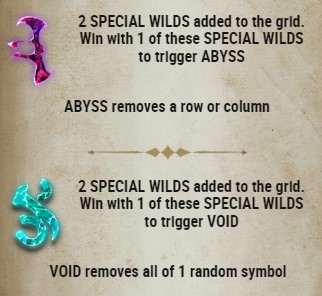 As mentioned before, the portal meter found at the top right governs the activation of many of the abilities. Depending on the number of symbols that the portal absorbs, the effect activated will be different. Some of the effects allow for more symbols to be added with the special effects ie a special wild symbol can appear that will allow for all symbols in a single row to be absorbed into the portal alongside the original symbols. The table below summarises the effects for the portal and how many symbols, it takes to activate.

Wins are achieved when 4 or more matching symbols are touching each other either vertically or horizontally or a combination of both.

Winning tiles will explode and be replaced with tiles falling down into the gaps. 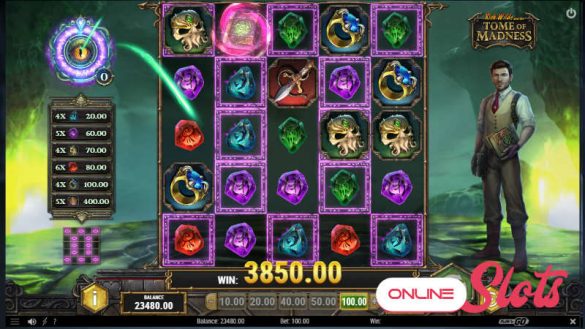 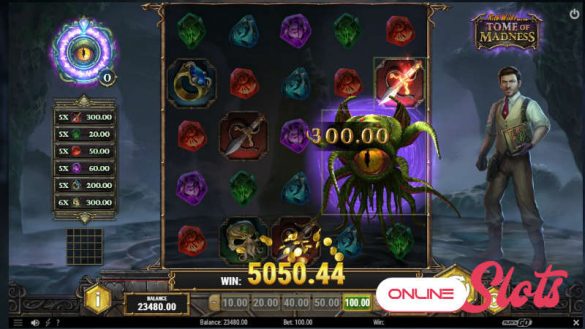 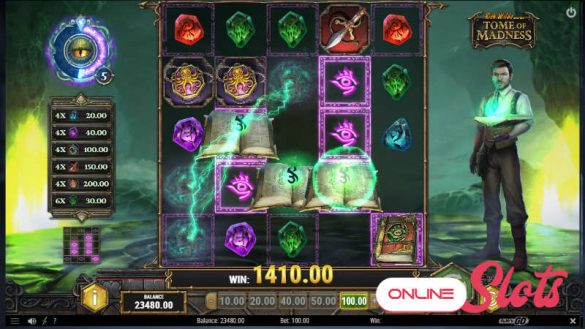 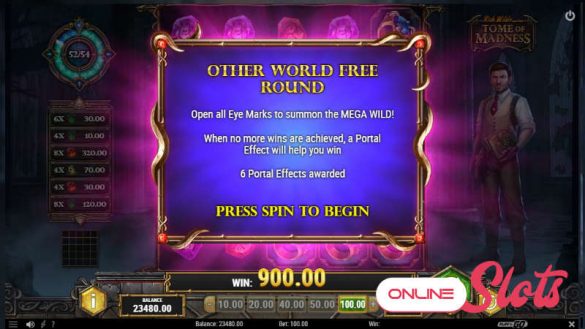 Rich Wilde and the Tome of Madness, gets a 88 from us. While the game has the same polish to it of the other Rich Wilde games in terms of fantastic visual and sound design, the game does lack some fun game modes when compared to the Book of Dead. There aren’t free spins to be triggered in the game and there isn’t a gamble to be made, which is surprising given the Book of Dead’s success with those game elements. And to top it all off, the bonus round is fairly difficult to trigger. This all results in a game that is sure to be entertaining for a little bit with its aesthetic but the lack of active gameplay when compared to Book of Dead, makes this game a bit monotonous.

In short, while Rich Wilde and the Tome of Madness provides a welcome and well-executed theme change to one of the most popular slot games of all time in Book of Dead, the game itself is let down by the stripping of some key features. The addition of the Other World bonus round does go a long way to fix that but it is overall frustratingly rare for the bonus round to trigger. That’s why we can only give the game 88 despite its excellent design. Because while a good game in its own right – we expect that many will find themselves back at the old favorite Book of Dead, sooner rather than later.

Where can I play Rich Wilde and the Tome of Madness?

Rich Wilde and the Tome of Madness is a slot game built by Play'n Go Casino software. Even though Play'n Go is not one of the most popular Gaming providers many casinos do offer their gaming selection. Here is a list of Top casinos who offer Play'n Go Games