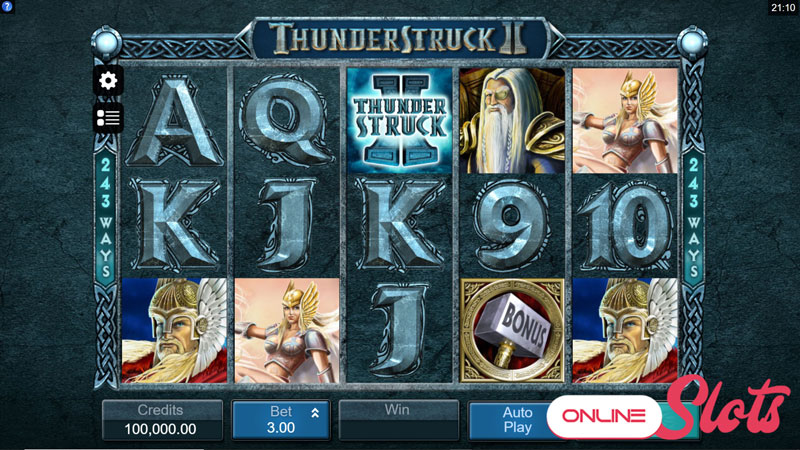 Thunderstruck II was released by Microgaming Casinos in 2017. It’s the sequel to the smash hit and long-time casino favorite Thunderstruck, which was published in 2004.

With over 500 original and classic casino games under their belt, Microgaming is a full-fledged platform with plenty of support from online casinos. It balances the 14 base symbols over with four unique free spin stages and a secondary Wildstorm feature.

You can bet between 0.30¢/p and $/€15 over five reels and three rows. Select between one and ten lines, with the max bet offering 243 pay lines, or potential multipliers and effects.

The Thunderstruck II logo symbol serves as a wild that doubles your result, and five in a row brings the highest base win. Three or more bonus hammers unlocks the Great Hall of Spins with cumulative effect. The more often you trigger the free spin feature, the greater your rewards, with the opportunity to hit the 2.4 million-coin jackpot.

From the moment you see the icy Norse design, the iconic Thor takes hold of your imagination. Along with three other gods, including Valkyrie, Loki, and Odin, there’s a very dynamic and original set of mechanics for our mythical characters.

The great Loki’s Wild Magic ability substitutes symbols on reel three to complete and multiply your pay line. Odin’s Wild Raven symbol is a powerful multiplier, especially when found on the same pay line, and Thor’s abilities bring greater rewards with winning combos. Valkyrie is a reliable warrior who offers a strong multiplier on every free spin.

The free spin trigger is astutely symbolized by Thor’s hammer, which also brings a one to 200-times win, starting with only two in a pay line. Two additional base symbols, including a Norse ship and a mystical golden palace spread the odds of hitting a pay line, while offering a higher win than the 9 to A symbols.

This is a welcome title stylistically speaking in the impressive list of games provided by Microgaming Casinos. The incredible Great Hall of Spins is definitely the main attraction, with each character having a chance to shine as you make your way to activating Thor’s magnificent abilities.

In all fairness, it’s the Great Hall of Spins free spin bonuses that wins so many points in slot reviews. The more you play, and the more often you trigger this feature, the greater your potential reward.

However, that’s not to say that the base wins aren’t worth it. The Thunderstruck II logo symbol can double your wins, and also provides an additional opportunity to get the highest base win of 1,000 times. That’s twice the amount of getting five Thor symbols. The Wildstorm feature that can happen at any moment gives you the chance to win big, even outside of the Great Hall of Spins.

With a minimum bet of 0.30¢/p and a max bet of $/€15, there’s a huge range of risk. The highest paying of the 243 pay lines exists on the Great Hall of Spins free spin feature. At the same time, there is always a chance to hit a decent win.

The 9 to A symbols bring from five to ten-times wins with just three in a row, and five in a row brings 100 to 150. The addition of the 9 symbol reduces odds a little bit, however there are casino games that only have 10 to A and have the same 243 pay lines.

Microgaming has perfected this balance. Where there’s more potential symbols to match up on a given pay line, the rewards are rightly higher than many other games.

The scatter feature in this casino game is the Thor’s hammer symbol. It can be activated in any direction, where two or more provides a nice, small base win. Three or more triggers the free spin feature, which we’ll discuss later.

The Thunderstruck II logo symbol functions as the wild. What makes it so powerful is that it can complete a four or five of a kind and provide a huge doubling bonus. That’s effective for a regular spin outside of the Great Hall of Spins.

The only exception is that it doesn’t function as a wild for the Thor’s hammer symbol. It also provides its own payout if you happen to get three or more Thunderstruck II symbols in a row, which can be even more powerful.

There’s also a Wildstorm feature that can trigger randomly on any spin. It converts anywhere from one to five entire rows into wilds. As you know, the payout for that can be extremely valuable.

Thunderstruck II is technically a progressive slot. The first five times you enter the Great Hall of Spins, by getting three or more hammers, you go with Valkyrie. She only provides 10 free spins, but she has a solid five-times multiplier to all your wins. You can also retrigger her 10 free spins within the Hall.

From the fifth time you enter the Great Hall, Loki is available. His Wild Magic symbols will create substitutes at random, delivering an enormous amount of chances to complete a pay line. He also comes with 15 free spins.

Odin comes after your 10th visit to the Great Hall of Spins and gives 20 free spins. He has two ravens that convert random symbols into two or three-times multipliers. However, his real superpower is delivering the Thunderstruck II maximum of a six-times multiplier, when both ravens last on the same pay line.

Thor takes the progressive nature of this game to the limit. After delivering 25 free spins, he delivers up to a five-times multiplier by stacking its effect with consecutive wins.

Jackpot City is our highest rated online casino that offers Thunderstruck II. They have a very generous 200% match on your first deposit, up to $/€ 1,600. Their welcome bonus is about the highest you’ll find anywhere.

Lucky Nugget offers a 100% deposit bonus up to $/€100. This welcome bonus might be attractive if you only have a very small amount of money to play with. However, they also offer loyalty points that you can use on casino credits, holiday getaways, and some high-end item prizes. They also provide bonus offers on the weekends.

Royal Vegas Online Casino offers a 100% match bonus up to $/€1,000, which is about right in the middle. If you’re looking to try Thunderstruck II as well as some of the other enticing games from Microgaming Casinos, then 100% of your bonus funds can be used for that.

LeoVegas offers 20 free spins before making a deposit, as well as other noteworthy welcome bonuses. They offer a 100% match bonus up to $/€, which isn’t super high, but they deliver a decent platform. They’re fast and efficient and have a good variety of reliable withdrawal options.

Ruby Fortune Casino provides a 100% match welcome bonus for your three initial deposits. They’re very good to new players, allowing you to get up to $/€1,000 in bonus funds to use towards your favorite slot games.

Spin Palace Casino is a full-fledged desktop and mobile casino platform. Their welcome bonus goes up to $/€1,000, which is a pretty standard offer. Where they shine is in their loyalty club and various VIP levels, delivering more value over time.

All Slots Casino offers a welcome bonus of up to $/€1,500, which is one of the highest. It’s not 100% on multiple deposits, but they have exclusive jackpots, including the Jackpot Mega Moolah. 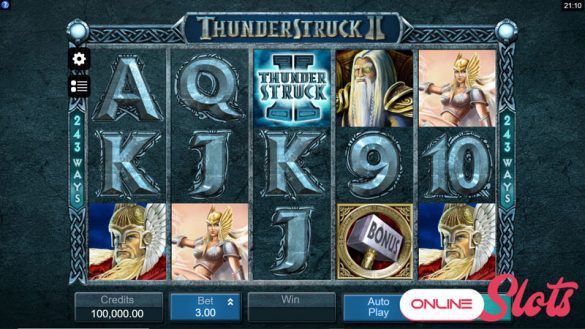 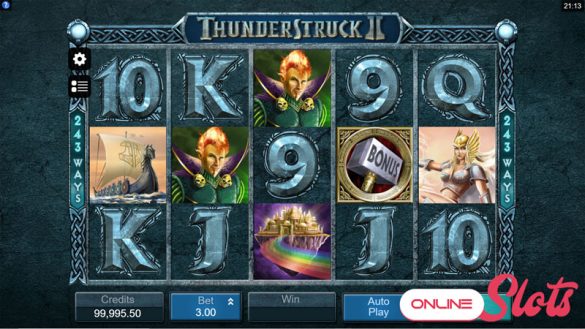 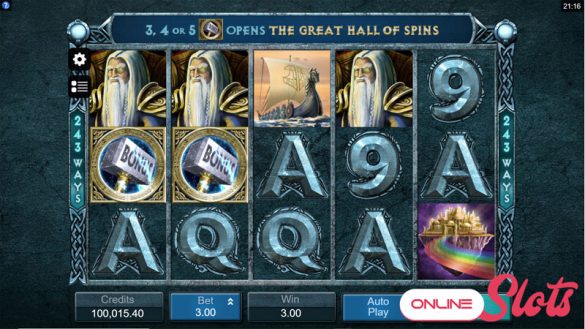 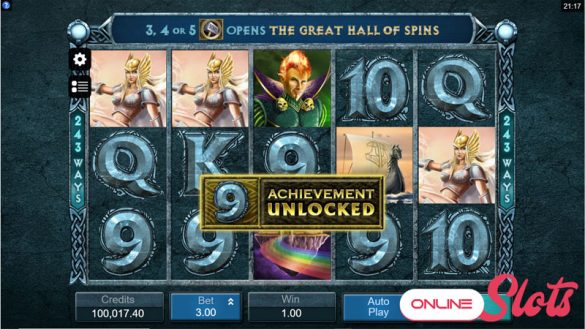 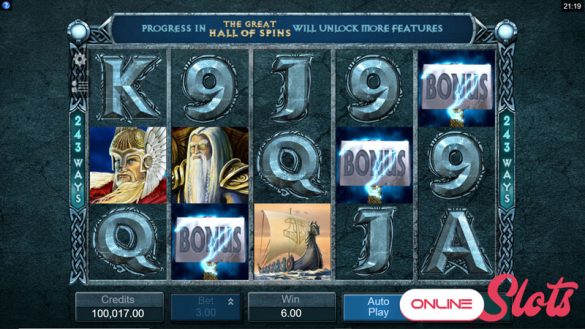 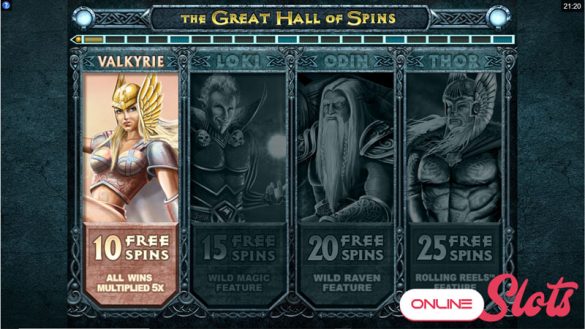 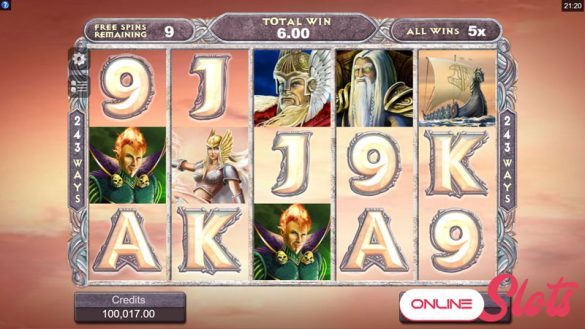 In this Thunderstruck II review, we’ve covered the mechanics and win opportunities in this sequel to the decades-long fan favorite. It’s a well-supported game on Microgaming’s comprehensive casino gaming platform.

You answer to the slot FAQ’s are carefully and expertly answered by the balance of this game. It has more symbols, but also higher pays. You can get five of a kind more often with their generous Thunderstruck II logo wild multiplier, as part of the 243 exciting pay lines.

This casino game got a lot of attention in the slot news, and for good reason. The moment you reach the Great Hall of Spins, you know you’re in for some powerful free spins. It works extremely well as a progressive slot, with the mighty Thor delivering extra free spins and a cumulative win multiplier.

Because it’s published and distributed by Microgaming, you have an excellent choice in casinos to play at. Choose the welcome bonus and loyalty benefits that are right for you.