Jack and the Beanstalk Slot Review 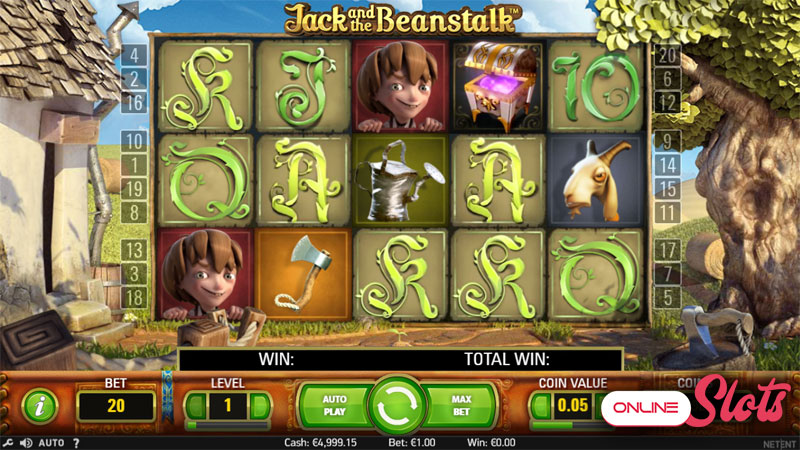 Jack and the Beanstalk Introduction

You probably know that story about Jack, a little boy who sold his cow for a handful of magic beans, defeated a giant and became rich. Now, thanks to NetEnt, you can play out the fairy tale on a five-reel, three-row slot that boasts no less than 20 pay lines. Launched in 2011, the games may be played from as little as $/€0.20 per spin and has a Free Spins feature with plenty of different ways to win. The non-progressive slot offers a maximum payout of 300,000 coins and an RTP of 96.5%. What makes it so special though, are the walking wilds, scatters and bonus round that are each designed to boost your winning chances. The game is tailored perfectly for both mobile and desktop gamers, and while it may be 7 years old now, it still holds its own against some of the latest releases when it comes to innovation and payouts. Take a look at our top online slot reviews to see how this game compares and read our in-depth Jack and the Beanstalk slots review below.

Jack and the Beanstalk Theme

Before we talk about how to play Jack and the Beanstalk slots, let’s talk about the theme. You know the fairy tale, right? It’s all about a little boy called Jack who sells his cow for magic beans from the market. Jack’s mother throws the beans in the yard, only for a beanstalk to sprout. Jack decides to climb the beanstalk, which ascends up, up and beyond, and attempts to steal treasure from the giant’s castle. This is exactly the story the slot depicts. The visuals in the game are nothing short of exceptional, with the background a vision of Jack’s farm and house. On the reels, you will find a few fairytale-themed playing card symbols that run from 10 to Ace. The Ace along can bestow upon you 100x your bet. You’ll also find story-related symbols such as the hatchet, the two-headed giant, a watering can, and, naturally, Jack. Jack has the power to multiply your wager as much as 1,000x over. This isn’t just a standard base game, though. In typical NetEnt fashion, the slot features some stunning features that enhance your gameplay and winning opportunities.

Jack and the Beanstalk Features

Online slots terminology is filled with words like “scatters,” “wilds” and “free spins” and Jack and the Beanstalk is no different. You’ll find plenty of appealing features in this game. The lower symbols are presented in the form of the fairy-tale themed playing cards. The higher paying symbols come in the form of the giant, his wife and Jack. Even the game’s logo serves as a wild symbol, while the treasure chest is the scatter symbol.

To really get the most out of Jack and the Beanstalk slots, you want to get your hands on more free spins to boost your bankroll. It is possible in this game. Land three or more Treasure Chest symbols on any of your reels and you’ll be rewarded with 10 free spins. The Walking Wild symbols also feature during your extra spins. Land the treasure chests during your free spins round, and you’ll get yet another 5 free spins. Even better, every free spin you get with the wild symbol is multiplied 3x. There’s also the Treasure Collection. During the free spins feature, you’ll notice key symbols landing on the fifth reel. Collect 3 keys and the next wild symbols becomes a stack of money bags. Get another 3 keys, and the next wild symbol becomes 3 gold hens. Get yet another 3 keys (in other words, 9 keys) and the next wild turns into a golden harp, expanding and increasing your chances of even more winnings.

If a wild symbol falls anywhere of the reels during the base game, you’re rewarded with the re-spin feature. It’s the Walking Wild that you want for this. Trigger the re-spin feature and the Walking Wild proceeds to one reel to the left, leaving you with more ways to win. As long as the wild symbol remains on the reel, your re-spins keep going. During your re-spins, you might just land even more wilds, and so the feature continues.

One of the most appealing features in the game is the Walking Wild. The symbol is the game’s logo, and when it appears, you trigger the re-spins. Any and all wins you receive that contain the wild symbol are tripled and the icon will substitute for standard symbols, except for the key and scatter symbols.
The Treasure Collection serves as the stacked wilds. Three key symbols trigger 2 money bags. Six key symbols transform into 3 stacked golden hens. Nine key symbols activate the expanding golden harps. Once you’ve collected nine key symbols, the next wild that comes into view turns into the expanding harp and covers an entire reel.

Jack and the Beanstalk Play for Real Money

Take a look at the likes of our Captain Spins Casino review, and any other casino partnered with NetEnt, and you’re sure to find a Jack and the Beanstalk slots casino. All the casinos that we review offer some sort of welcome package, which might just come in handy for you to play Jack and the Beanstalk slots. Whether the bonus comes in the form of free spins or a match deposit, it’s the perfect way to try out the game without risking your own cash. Below is our top list of online casinos that offer this game.

Jack and the Beanstalk Symbols and Pay Table

Jack and the Beanstalk Rating

If you’re on the hunt for the best online slots, it’s time to try NetEnt’s Jack and the Beanstalk slot. The game has been optimised for both desktop and mobile play, which means you never have to miss out on a winning opportunity.
As part of our Jack and the Beanstalk slot review, we need to mention that this is a medium variance game with wins showing up pretty frequently in the base game. What’s really neat about this slot is that there is a humongous 1,500x your stake available in the base game as well as the free spins feature. Of course, the best thing to hope for is 9 key symbols in the free spins feature if you’re going for big wins.
This is one of NetEnt’s most popular slot games. Looking at its gameplay and design, it is easy to compare it to Gonzo’s Quest, which uses similar animations. Jack and the Beanstalk offers up an attractive overall appearance and a theme we are all familiar with. This is exactly what draws many players to the reels, and once you get started, chances are, you’ll get hooked on this one.
That’s what it is all about, though, when it comes to finding slots you want to play over and over. The bonus round in the Jack and the Beanstalk slot really stands out and is designed to offer up massive payouts. In fact, it’s not that difficult to stumble upon a full screen of Wilds during your spins and with a little luck on your side. What’s more, the walking and expanding wilds in the game’s bonus round all offer potentially big payouts, even if you’re just having a little flutter.

Does Jack and the Beanstalk offer free spins?

What are the minimum and maximum bets?

Can I try the slot out for free?

Yes, you can play Jack and the Beanstalk in demo mode before you commit to real money wagers.

Is the game available at mobile casinos?

Yes, you can spin the reels anywhere, anytime. Jack and the Beanstalk is perfectly compatible with all mobile devices.

How many reels and pay lines does the game have?

Jack and the Beanstalk is a 5-reel slot machine with 20 fixed pay lines. The game is based on the century’s old fairy tale, complete with all the well-known symbols.