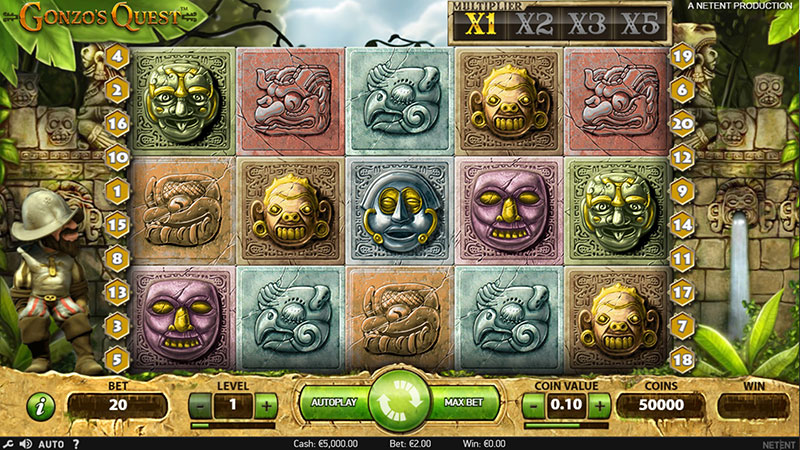 Powered by NetEnt, Gonzo’s Quest is a marvelously designed video slot game with 5 reels and 20 paylines. Players can enjoy spinning the reels from a minimum of 20c to a maximum of $/€50 per spin. The game features unique Avalanche Reels that deliver wins of up to a 5x multiplier for every winning spin, and a Free Falls Bonus feature offers multipliers up to 15x for consecutive wins.

Gonzo’s Quest is themed after the famous conquistador Gonzalo Pizzaro and the discovery of the mystical golden city Eldorado. Finding Eldorado was an obsession of every single Spanish conquistador that came to Latin America at that time, but none were more famous than Gonzalo Pizarro.

Travel to the jungles of the Amazon and assist Gonzo in his search through the Peruvian ruins and he will generously reward you for your trouble. The slot game starts with a short introductory movie that will get you into the story and thereafter superb gameplay. The graphics are vibrant and crisp, the animations excellent. Although released 8 years ago in 2011, Gonzos Quest has stood the test of time and is well worth trying.

The history books tell us that Gonzalo Pizarro y Alonso was a Spanish conquistador and younger paternal half-brother of Francisco Pizarro, the conqueror of the Inca Empire. He was born in Trujillo, Spain and lived between the years of 1510 and 1548. Gonzalo and his brothers ruled the settlements in Cuzco and over the years, he would go on to fight several battles against the Inca and other nations, eventually turning on the Spanish king. He ended up surrendering to the king after a losing battle but it was his quest for El Dorado that is the focus of NetEnt’s creation of the online slot game.

The video slot game features Gonzo, a very entertaining guy donned in his little conquistador’s uniform. He scratches his beard and spins his helmet in boredom until players hit a win, then he dances and fist pumps, even performing a moonwalk across the screen when the payout’s a top win.

The visuals are beautifully rendered. There’s an Inca temple in the background, lots of greenery, and water gently overflows out of a stone carved face. The background noises creates the feeling that you’re really in a Central American jungle, and when the symbols fall, the sound is that of real stones tumbling.

The symbols are intricate and realistic Inca carvings of animals and humans set on a square stone. The pale blue symbol is the lowest value symbol followed by pink, tan, purple, gold, green and finally, the highest paying symbol is a grayish-blue face with gold trim.

The Free Fall symbol is a solid gold medallion with a face in the middle of it, and the Wild symbol is a gray engraved stone with a gold question mark and circle around it. 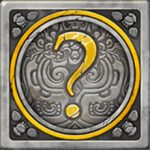 Gonzo’s Quest slot game offers players a charming game with lucrative bonuses, Wild symbols and free spins with cash prizes. In the game, free spins are known as free falls and landing 3 or more awards 10 free spins, and if the multiplier is increased during that time, free spins increase to 15.

Players have always loved this game not only because of its unique and lucrative features but also because with a maximum coin size of 5c, players can win up to 62,500 coins.

Gonzo’s Quest was the first-ever slot game to replace the traditional reel spin with an Avalanche feature. The symbols cascade down the screen like falling rocks, and when symbols form winning combinations, they are crumbled into dust leaving gaps that are filled with more falling symbols. The Avalanche feature allows players more and more chances to win from each spin. 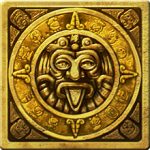 Win up to 37,500 time your stake with the 15x multiplier! Gonzos quest is a slot with medium valance. Players can win up to 2,500 times the stake when the reels fill up with the highest value symbol on each base game spin from a 1x multiplier. If you factor in the potential 15x multiplier in the Free Falls feature, there’s a massive 37,500 times your stake per free spin to be had!

With the Free Falls feature, every bet line that contains three of the Free Fall symbols ensures 10 free spins. While this happens, the Avalanche Feature remains in place and the multipliers for each consecutive Avalanche are increased until they reach 15x. Should the Wild symbol remain in action during the Free Falls round, players get even more multipliers.

We only recommend online casinos that are reviewed, regulated and licensed by reputable and respected authorities whose job it is to provide remote gambling licenses to online casino operators. Licenses are not issued easily, an online casino has to prove that they have the strictest standards of player protection in place.

Deciding which online casino is both professional and trustworthy at the same time is not an easy task. This is mainly because casino game enthusiasts are spoilt for choice as there are hundreds of online casinos available on the Internet. Never leave your money at any online casino that isn’t established to protect yourself from dubious gambling operators.

Playing at an online casino for real money means having to make a deposit. All the online casinos where you can play Gonzo’s Quest have a variety of payment methods in place. A top casino will not only have a number of payment providers in place but will facilitate players with quick and easy deposits. Payment providers include credit and debit cards, widely available around the world, an eWallet provider like PayPal, Skrill or Neteller, prepaid cards like PaySafeCard and bank transfers.

Our online casino toplist offers quality online casinos that have a large library of classic and modern slots, table games like Blackjack and Poker, a Real Live casino and other favourites such as bingo and scratch card. Gonzos Quest by NetEnt is a player favourite. The game offers wonderful special features to accumulate great wins, a fascinating opening video and the gameplay is compelling. 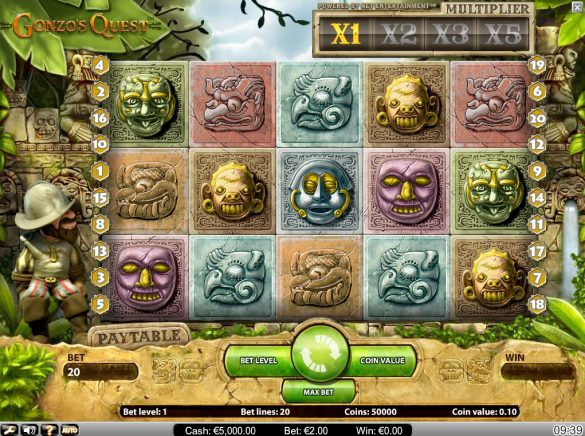 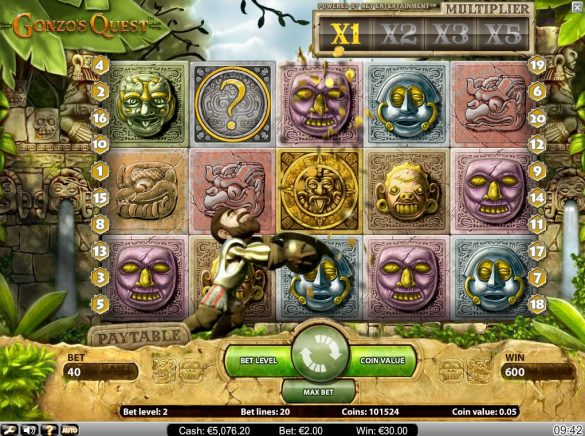 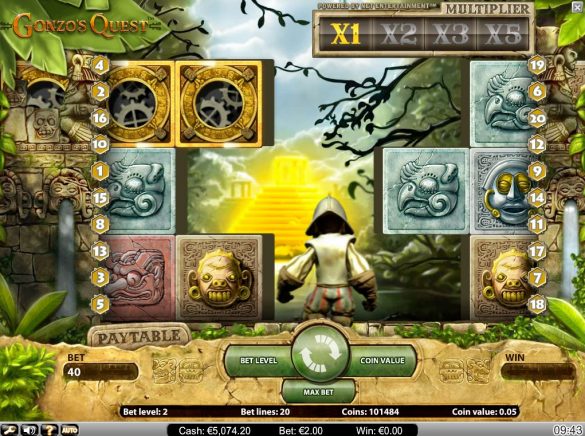 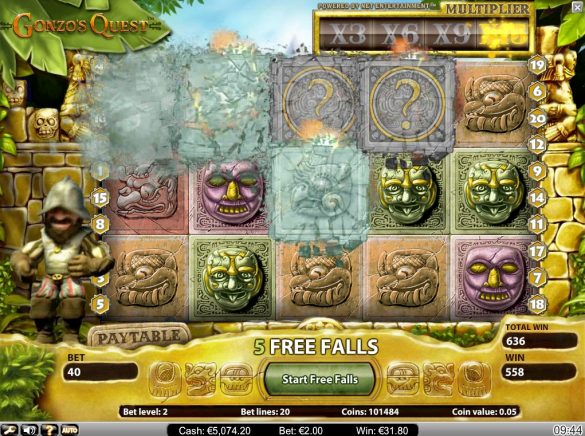 Gonzo’s Quest is one of NetEnt’s biggest success stories and although has been around for some time now, the visuals are magnificent even by today’s standards. The game offers the first ever Avalanche Feature, that’s now been reproduced in many other games. Over the years the slot game has endured popularity with players the world over and this has ensured that Gonzos Quest earn a place in the slot game hall of fame.

You can play Gonzos Quest today at one of our reviewed and recommended online casinos.

With enticing and innovative 3D animations and a fully interactive story, Gonzo’s Quest sets a new standard for the modern slot game. So relax, sit back and enjoy your tour of one of the most exotic locales in South America, a place filled with adventure, danger, and plenty of entertainment to offer.

This very interesting Top rated NetEnt slot game has been delivering a really fun and rewarding slot game experience for the past 8 years, and that speaks volumes as to how interesting the game still is.

Where can I play Gonzo's Quest?

How to win Gonzo's Quest?

Gonzo's Quest has a very high Volatility with a long cycle length; which means that even if you have a few empty spins, that it's bound to be followed by a cycle of several wins. the slots offers a high hit probability and a solid bonus hit distribution. So make sure to use you bet size smartly by lowering you bet when you enter an empty cycle and increase the bet size when you start a winning cycle.

What is Gonzo's Quest RTP?

Gonzo's Quest has a Returns to Player percentage of 95.97. Read our full review on all the features and how to beat this slot.